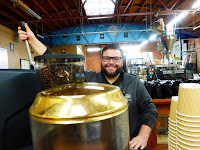 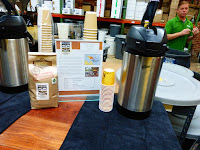 When I heard about the Caffeine Crawl I knew this was for me. I love coffee; a chance to taste the best java from the top brewhouses in town sounded perfect. There is a third wave of coffee going around the country; I wanted to learn more about it. Techniques called pour-over and cold brewing, and terms like organic-fair trade have become popular. The new oficionados are purists who believe their coffee should sit on its own, without cream or milk.

James Burton, a marketing specialist, launched the first Caffeine Crawl in Kansas City in 2011. They have now expanded to 15 cities across the US, including San Diego where the third annual crawl was held on January 21-23, 2016. 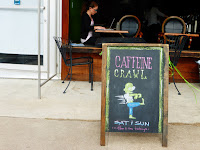 There were 21 local coffee houses participating and ten routes to choose from. I signed up for a Saturday morning #3 route that included visits to six locations. The first five were within a couple miles of each other; however, parking was a challenge at a few of them. The final, Bay Park Coffee, was about 6 miles away, but worth the drive.

There were about twenty-five in the group, but we lost a few at the end—I expect that's what happens at pub crawls as well. It started at 9 ended at 12:30—each stop lasted 25-30 minutes with ten minutes in between. It moved fast, and didn't allow much time for lingering. However, I came away with some new favorite coffee shops to revisit. I'm not sure if my appreciation of Starbuck's will ever be the same again.

Here are the places on my route, in the order we visited them: 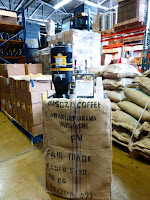 Cafe Moto, (2619 National Avenue) is located in Barrio Logan, one of the oldest neighborhoods of San Diego. They have a convenient parking lot for customers. The kickoff took place in their warehouse where we were surrounded by hundreds of burlap bags full of beans from all over the world. This was also the roasting area. There was plenty of hot and cold coffee to enjoy, and delicious pastries as well. After a presentation, we were given goody bags, and the raffle winners were announced. The time passed quickly. 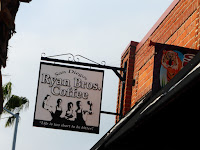 Next, we all headed to our cars for the short drive to Ryan Brothers (1894 Main St) which is also located in Barrio Logan. I arrived just in time to hear Tom Ryan's informative presentation in the warehouse. First, he gave us an explanation of the roasting process while the roaster machine was doing the work. He said that if the machine broke down, they have only 24 hours before they run out of coffee. We also had the opportunity to smell some wonderful coffee bean aromas from dozens of large barrels—ranging from floral to chocolate. We finished with three coffee tastings, and a sweet heavy specialty of the house as well. We all left with free coffee mugs, and bottles of their new Raceway cold coffee line. Cold brew is brewed cold and stands at room temperature for at least 12 hours; the result is lower acidic levels and a more mellow brew. 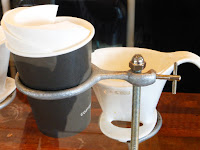 Dark Horse Coffee Roasters, (811 25th Street) was our next stop. It's located in Golden Hill where I arrived a little late. I parked more than a block away, but it was a pleasant walk past some interesting old homes of Golden Hill. We were served a Dark Horse cold coffee with ice cream which was delicious.
Next – two coffee houses in Little Italy, about a block apart.

Bird Rock Coffee Roasters (2295 Kettner Blvd) is a lively corner shop in Little Italy we were given a presentation about the company and its single-origin coffees. We were treated to a sample La Esmeralda Panama that was named as one of the best coffees of 2016 by Good Food Awards. Bird Rock was also awarded Roast Magazines 2012 “Micro Coffee Roaster of The Year.” 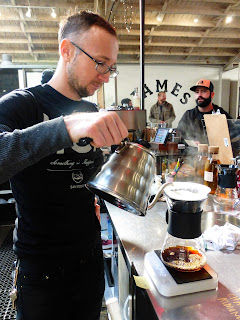 James Coffee Co (2355 India St) is the only place that I had previously visited, and had the privilege of enjoying, for the first time, a pour-over coffee. I was pleased to see that they were demonstrating the process for the Caffeine Crawlers and giving us samples. Pour-over is a slow-drip single cup of coffee, made to order, where hot water is slowly and delicately poured over freshly ground beans.

There is a guitar sitting next to the coffee roaster (they roast all of their beans in-house) which belongs to co-owner David Kenney, rock star and former guitarist of Angels & Airwaves. He switched to the sounds of the coffee roaster and started James Coffee in 2012. He was available to answer our questions. 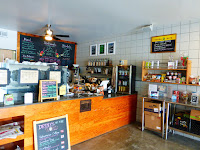 Bay Park Coffee (4120 Napier St.) was the final stop of the tour. Here we could linger over the many samples of coffee and tea available to us. I even had time to seek out cream for my final cup of java for the day.
I also learned about medicinal teas from the owner, Erica, who recommended drinking three cups of tea a day to stay healthy. I was happy to sample a good-sized cup of the Rooibos Tea because it is caffeine-free, and it just might help me shake this cold I can't get rid of.

I drove home thinking about what a great time I had, and was reminded again the next morning as I sipped my coffee from the Ryan Bros mug with their motto on it:
“Life is too short to be bitter.” 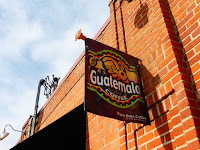